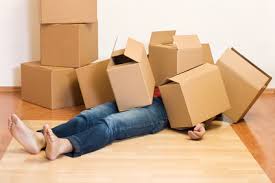 When we left off back in July, I was toiling over my father’s pending move to his new beautiful condo that happens to be across the street from moi.  I was preparing for the worst, believing that I would be the person who would have to organize and pack him, and that at the end of the day, it would have been much less strenuous (and far more cathartic) to load the basement of his old residence with C4 and blow it up.

I have to report that with all of my worrying and stress, my father is all moved in now.  And to be honest, the process wasn’t anything like my expectations.

His first moving day was scheduled for August 15th.  I have to admit that I stuck my head in the sand up until the week before the actual move date.  And then I got panicky.  I sent the movers over to my dad’s house for an estimate, and somehow, despite the fact that I’d previously informed the movers that they would be packing AND moving, somehow the packing piece was omitted from the estimate.    BUT my father assured me that he had been organizing and “getting things together.”

Serendipitously, the BF had a gig not far from my father’s old house on the eve of the move.  I was due to attend the gig, but we had a little spat when I dropped him off, so I decided to hijack his van and instead visit my dad’s house and see how the packing was coming along.

In fact it looked as though he wasn’t moving in the next 24 years, let alone the next 24 hours.  He was out when I dropped by, so I drove the BF’s van to Home Depot and loaded up on boxes and tape.  I returned to my father’s house and moved through it like a white tornado (or black tornado, as it were), packing everything I could in the most sensible way possible and trying to create some semblance of order in preparation for the movers.

My father returned home in the midst of my packing project, just in time to receive a few harsh words from me, given that I hate nothing more than packing and moving.  I told him that if he’d been honest with me, we could have systematically gotten this done over the last month or so.  Then I felt bad, because there’s really only so much that I can expect of an 80+ year old man who is clearly overwhelmed by his belongings (even if most of them should have been taken directly to the alley).

Potentially long story shortened, the movers arrived and moved everything that I was able to pack that day.  But that wasn’t the end of it.  I had to return several more times to conclude the packing and dumping of the rest of the stuff in preparation for the NEXT moving day (which fell on my birthday).  I also had to facilitate the work of the painters, who were scheduled to come in right after Labor Day to spiff up the place for the next sucker, I mean owner.  :-)

The trouble now is that he needs more furniture, as he decided to get rid of his living room furniture.  And the furniture that he wants?  MINE!  So, guess who gets to go shopping for new furniture so that my father will have a place to relax?

I swear, a daughter’s work is never done.