I hate sweeping, but I also hate dirty floors.  A few weeks ago, I broke down and bought a Roomba.  I’d previously received a cheaper model of robotic vacuum as a gift several years earlier, but it didn’t have cool features, like the ability to schedule cleanings or the programming to return itself to its charger.

So of course I got the one that has the remote control just because it has a remote control . . . not because I NEED a vacuum with a remote, or that I will ever use that feature.  I’m gadgety, and it seemed like a good idea at the time.  Roombas aren’t cheap (especially those with remote controls), but with one of the fabulous Bed Bath and Beyond coupons, I was able to get a generous 20% discount.

Roomba has an online registration where it asks consumer to name their vacuum cleaners.  Not sure why, but I had no choice but to go with it.  My lack of creativity at the time caused me to name it Zumba.

I programmed Zumba to dance its little way around the first floor each night at 7:30 (if I’m being honest, I thought I was programming it to run at 7:30 am.  Clearly there was a user error).

I have been entertained by Zumba since the moment it took its first sweep.  I haven’t been this amused since having cats.

The first time, I was amazed at how long it ran, and how much dust it picked up.  I moved it upstairs for a few days, and couldn’t find it after the second sweep.  My assumption was that there was so much dust and junk on the floor that Zumba rolled out the door in protest.  I finally found it wedged under the dresser.

I’ve since found Zumba stuck in various places, and it has a penchant for closing itself in the powder room.  It rolls in, and then closes the door behind itself.

We got in late last night, and I parked in the garage while the BF parked in front of the house.  When I approached the back door, I was wondering why he hadn’t unlocked the door because he had a head start.  I walked in and found him staring at the floor, perplexed.  There were white tufts all over the floor outside of the powder room and the door was closed.

The BF was a little freaked out, and didn’t know what happened.  I knew immediately.  This had Zumba written all over it. 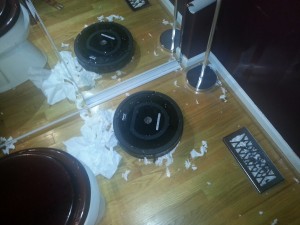 So, my forensic skills told me that the toilet paper, which once occupied the stand in the top right corner of the picture, somehow got sucked up by Zumba (which had already locked itself in the powder room) and was pulverized.  I had my work cut out for me, and it took about an hour to clean up the mess and unclog the toilet paper from Zumba’s rollers.

At this point, I’m wondering whether the time I’m spending rescuing Zumba couldn’t be better reallocated if I just decided to get off of my lazy ass and sweep.