So . . . what’s new with me is that I’m contributing to a new podcast.  Here’s the story.  My fabulous friend, Jen Lancaster, recently wrote and released a memoir — her 15th book — titled Stories I’d Tell In Bars.  She self-published this book, which gave her the latitude and autonomy to supply her strong fan base with what they desired of her — fun stories as only Jen can tell.

The only trouble is that she has to do all of the promotions and marketing herself, and decided to also embark on a podcast, which I thought was a great idea.  Even though I’d never listened to a podcast.  Some people listen while driving but I’ve always opted for music, as it quells my road rage.  I have friends who enjoy podcasts and have had a few on my list but as I no longer have a commute to work, I never found the time to listen.

That said, when she invited me to join her, I was both flattered and concerned.  Flattered, because of course I was.  Concerned because a) as I mentioned above, I’d never even listened to a podcast, so I would have homework to do, b) I HATE my voice and c) I’m an extroverted introvert and while I love writing, my spoken sense of humor isn’t for everyone.  BUT we decided to proceed, with the BF graciously agreeing to engineer the recordings and master our sound, for which we are truly grateful.  Welcome to Stories We’d Tell In Bars! 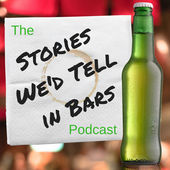 We moved forward.  Jen sets and outlines our content, which mirrors the chapters in her latest book, and we chat about stuff.  We’re doing well and getting better as we go.  I’m getting used to the sound of my own voice . . . kind of.  We’re getting mostly good reviews . . .  and predictably we’re getting some bad reviews.

Jen advised me a LONG time ago not to read reviews because they will twist you and piss you off.  As usual, she is not wrong.  Yet I persist.  I’m learning to laugh at them, but I’m also growing because of them (as I laugh at myself in the process).

I don’t typically get shitty about reviews, because we’re in a society of opinions and there was certainly plenty of feedback when I wrote The Gina Spot.  I do, however, get sort of irritated when the perceptions are because of something that I failed to communicate.

I’m getting crucified in reviews mostly because of the “Straight Trippin’” episode where we talk about travel.  Jen and I are discussing all of the things we require in a travel scenario.  I talked about our trip to Indonesia this year, and I complained about the long-ass 22 hour flight and confessed that it was the first time that I’d ever taken a long flight in coach.

Oh Lord . . . WHY did I say that?  ”She’s pretentious”  ”Who does she think she is?” “She’s unrelatable.”  (Never mind that I can’t think of one soul who enjoys cramming one’s ample ass into a micro-seat for nearly a day, but I digress.  Also? There’s no pretension-inhibitor like being a black woman in America [especially now], but that’s a different  topic altogether) The bottom line is that I didn’t tell the complete story, which I should have (even though it would have elongated an already long podcast).

Here goes . . .  to be clear . . . I DO enjoy flying first class.  Whenever I can.  Because who doesn’t??  I will scrounge for an upgrade like no other!  But when I’ve traveled to the Caribbean?  COACH!  New York?  COACH!  LA?  COACH! Business travel for Naturals (my startup)?  Honestly? You could probably weld me to the top of the plane if I were guaranteed a cheaper fare, and I’d adjust to the wind.

There are exceptions to this:  1) When I’m business traveling for a corporation/entity and 2) when I’m injured.

Most of my farthest travel has been for business.  When I’ve business traveled overseas, I’ve flown business class, which I don’t think is particularly unusual if you work for a large corporation.  Which is probably why it’s called “business class.”  I went to South Africa on a press junket, and while it was an amazing trip, it was sponsored by South African Airways who flew the five writers in business class as part of the experience.  To complicate matters, I’ve had three knee surgeries including an ACL reconstruction, so I once upgraded myself on a European trip to accommodate my inability to completely bend my knee. (Once that charge hit my credit card, I might have preferred to re-injure my leg).

But really, none of that matters.  The entire point is that, whether people like it or not, the 22 hour flight was a new experience for me and I would do it over again. Now that I travel more for pleasure and less for business, I’m assuming that long uncomfortable flights will be the norm. Unless I got upgraded, which I would gladly accept.   Because, again . . . who wouldn’t???  Unlike the review suggests, I’m pretty sure you can relate.

All of this to say that I’ve learned to be careful without completely self-censoring.  Sheesh!

But despite all of that buuuullshit, we’re having a great time and it’s a ton of fun to work with Jen.

That said, take a listen for yourself and be the judge.  Subscribe if you like it!  Feel free to make constructive suggestions of topics.  And keep checking this blog for the stories behind Stories.